Yoda was a Jedi Grand Master. He survived the Great Jedi Purge and went into exile on Dagobah. He was the Jedi Master of Luke Skywalker when Obi-Wan Kenobi told him to travel to Dagobah. Luke left Yoda and Obi-Wan to save his friends on Cloud City. One year later Luke came back before Yoda died.

Yoda was born in 896 BBY on Coruscant (this is not his species' homeworld, though). The Jedi found him and trained him in the Jedi Temple. He was trained by the Hysalrian Jedi Master N'kata del Gormo and became a Jedi Knight himself.

Jedi-Master of the Jedi Order

At the age of 96, Yoda became a Jedi Master and took a seat in the Jedi Council. In 800 BBY, he had trained his first padawan apprentice, and many more would follow. Among them would be Count Dooku, who would later leave the order and become the leader of the Separatists. In 32 BBY, Yoda witnessed the return of the Sith, as Darth Sidious and Darth Maul went out of hiding to play a crucial role in the Battle of Naboo. During this time, Qui-Gon Jinn also brought a boy named Anakin Skywalker to the Jedi temple, whom he believed to be the Chosen One.

When the Clone Wars broke out, Yoda took part in the Battle of Geonosis in 22 BBY. There he battled his former apprentice Count Dooku and saved Obi-Wan Kenobi and Anakin Skywalker from the Sith Lord. During the Clone Wars, Yoda would take part in numerous battles, e.g. the mission to Toydaria. During the end of the Clone Wars, he took part in the Battle of Kashyyyk. When Chancellor Palpatine revealed himself as Darth Sidious and took Anakin Skywalker as his new Sith apprentice, the Great Jedi Purge began. Yoda tried to stop Sidious, returned to Coruscant and challenged him in a lightsaber duel in the Galactic Senate. The Jedi master ultimately lost and went into exile on the planet of Dagobah.

Return of the Jedi

In 3 ABY, a Rebel soldier named Luke Skywalker visited Yoda in his hideout on Dagobah. He had been sent there by the Force ghost of Obi-Wan Kenobi. Eventually, Yoda agreed to teach Skywalker the ways of the Jedi and began his training. Yoda told him the ways of the Force and sent him into the cave of the dark side to challenge his fears. But when Luke had a vision of his friends being held captive on Cloud City, he left Yoda to save them. One year later, Skywalker returned, but Yoda was too ill to continue his training. He told his apprentice, that the only challenge left before he could become a true Jedi Knight was to defeat Darth Vader. Yoda then tried to tell Luke, that there was another Skywalker - but before he could reveal the identity of Luke's twin sister, Leia, he died. The Force ghost of Obi-Wan Kenobi told Luke the truth about Leia afterward, and Luke later duelled Darth Vader on board the Second Death Star. He redeemed his father, who killed Emperor Palpatine and therefore fulfilled the prophecy of the Chosen One, bringing balance to the Force again. During the victory celebration on the Forest Moon of Endor, Yoda appeared as a Force ghost, together with Obi-Wan Kenobi and the redeemed Anakin Skywalker.

There are four versions of this minifigure. Two are based on his appearance in Star Wars prequel and original trilogies and one based on his appearance in The Clone Wars. A new non-Clone Wars Yoda will be included in the Summer 2013 set 75017 Duel on Geonosis. A Santa Clause Yoda minifigure was also released, with the 7958 Star Wars Advent Calendar.

The original Yoda minifigure was released in 2002 with the 7103 Jedi Duel set. Although he was included in this Episode II themed set, his appearance resembled his look from Episode V. The minifigure depicts Yoda wearing the necklace and the clothing from this Episode. This figure was later re-released in two sets: in the 2004 released 4502 X-wing and in the 2005 released 7260 Wookiee Catamaran.

A version of Yoda during the Clone Wars was first released in 2009, with the 8018 Separatist AAT set. This minifigure resembled the cartoonized look of Yoda as presented in the Star Wars: The Clone Wars (animated series). Two years later, this minifigure was included with the 7964 Republic Frigate.

A special Holiday-themed variation of the Yoda minifigure was the Santa Yoda included with the 7958 Star Wars Advent Calendar. It depicted the Jedi Master as Santa Clause, wearing a red suit. Santa Yoda carried a sack on his back and used the same head as the Clone Wars Yoda figure.

A new minifigure of Yoda, depicting him during Episode II was released in the summer of 2013 in the set 75017 Duel on Geonosis. It shows the Jedi Master during the duel with Count Dooku. This hasn't been used in any other set since. 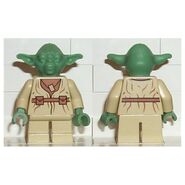 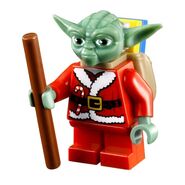 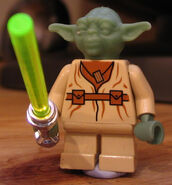 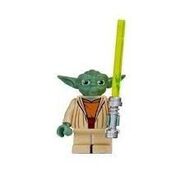 The disturbance I feel, in the Force. 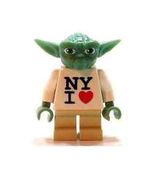 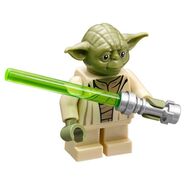 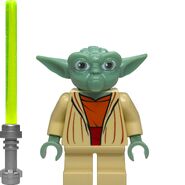 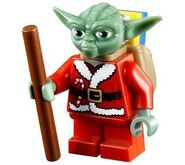 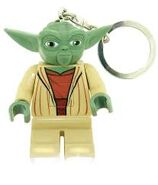 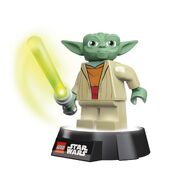