7150 TIE Fighter & Y wing
TIE Pilots are the pilots of the Galactic Empire. They are also known as Imperial Pilots. They have black legs, torsos with a breathing and voice vocoder, and helmets like a Stormtrooper's with two Empire symbols. They pilot Imperial TIE Fighters. They look just like the Stealth Troopers, who also are in black armour.

The TIE Pilot minifigure typically appears with some form of TIE craft, such as a TIE Fighter or a TIE Interceptor. They have a larger helmet than a normal stormtrooper and have a black torso and leg piece with unique printing.

The character based on this minifigure featured in Lego Star Wars II: The Original Trilogy and Lego Star Wars: The Complete Saga uses the same scripts as Stormtroopers, Sandtroopers, Beach Troopers, Death Star Troopers, etc. in those games. 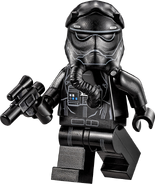 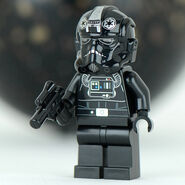