Blaster
Stormtroopers are the basic Imperial infantry made from cloning technology, but from a different template than the one used for the Clone trooper. Depending on their training, stormtroopers can also be Snowtroopers, Scout Troopers, AT-AT Drivers, and many other types of Imperial soldiers. The stormtrooper minifigures had white armor,a white helmet, and a black head that was usually used under the helmet. Their armor has changed over time from basic designs to more intricate ones with ammunition pouches and a more polished look. On the back of their belts they carried a thermal detonator.

The most recent incarnation

The Chrome Silver one

The rare one in the 7264 Imperial Inspection 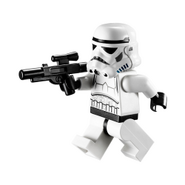