View source
This article is about the character. You may be looking for the set.

R2-D2 or R2 was an astromech droid and counterpart of C-3PO. R2-D2 and C-3PO are two of the few characters to be in all the Star Wars movies.

R2-D2 was created by Industrial Automaton on Naboo in 33 BBY. He had met C-3PO on Tatooine after they escaped from Naboo when the blockade was after them. After leaving Tatooine, and C-3PO, R2-D2 returned to Naboo. He was on the Naboo Starfighter that was piloted by Anakin Skywalker who became his master.

Hero of the Clone Wars

R2-D2 and C-3PO were reunited after the breakout of the Clone Wars on Geonosis in 22 BBY. For 3 years at war R2 often behaved heroically and saved his master and Obi-Wan in various missions. Another time was when Master Skywalker and Mace Windu along with his Astro droid R8-B7 were trapped in a Republic Cruiser which was destroyed by a young Boba Fett. He also helped Anakin and Obi-Wan in the mission to rescue Chancellor Palpatine. After Anakin turned to the dark side his new owner became Raymus Antilles. Shortly after 19 BBY, Antilles was separated from R2-D2 and C-3PO. The droids got many different owners over the following 19 years.

Hero of the Rebellion

In 0 BBY they returned to Raymus Antille's possession. But Antilles was strangled by the Sith Lord Darth Vader soon afterward. This occurred when Imperials attacked the Tantive IV. R2-D2 and C-3PO escaped in a pod to Tatooine where they found Anakin's lost son, Luke. After they were found by Jawas and sold to his uncle, Owen Lars and his wife Beru. Luke found out that R2 carried a very important message to Obi-Wan Kenobi (who changed his name to Ben) from Princess Leia Organa. Also, she gave him the plans about the Death Star so the Rebels could find a way to destroy it. R2 was in the Battle of Yavin when his master Luke piloted the X-wing and destroyed the Death Star.

In 3 ABY after the Battle of Hoth R2 went to Dagobah with Luke to find Yoda. While Luke was being trained by the Jedi master he saw his master X-wing sink into a river. Luke was trying to get it out but he hadn't completed his training. On the way to Cloud City R2 was locked at the main entrance where Skywalker will face Darth Vader. After they've escaped Cloud City from the Stormtroopers R2 helped C-3PO to fix his body.

One year later R2 and 3PO went back to Tatooine to get Han Solo back from Jabba the Hutt. When they entered his palace, R2 was carrying a message to Jabba. After their master had survived from the Rancor Jabba had R2 served drinks on his Sail Brage. After they got Han get back for Jabba R2 went back to Dagobah with Luke to complete his training. In the Battle of Endor when he was helping Han and Leia opening the station door, in the end, R2-D2 was in the Ewok village celebrating the Rebel victory.

In 1999, the 9748 Droid Developer Kit was released. It featured several models of Star Wars droids that could be built with this set. One of them was an R2-D2 model.

In Lego Star Wars The Video Game, Lego Star Wars II: The Original Trilogy (Console), Lego Star Wars: The Complete Saga and LEGO Star Wars III: The Clone Wars R2-D2 is a playable character. He can fly over limited differences and can activate astromech droid panels and can incapacitate several droids and stormtroopers. 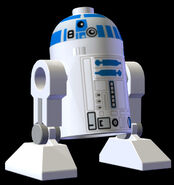 The old version of R2-D2 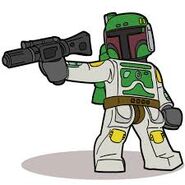 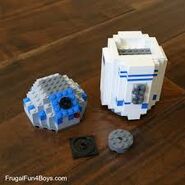