7101 Lightsaber Duel
Qui-Gon Jinn was a Jedi Master who was the padawan of Count Dooku and the master of Obi-Wan Kenobi.

In 32 BBY he and Obi-Wan were sent by the Jedi Council to Negotiate with the Trade Federation to stop the Invasion of Naboo. The Federation leader, Nute Gunray, ordered them to be killed instead. The Jedi escaped into a Lander and escaped to Naboo. Qui-Gon saved the Gungan Jar Jar Binks, who led them to Otoh Gunga. There, he used a mind trick on Boss Nass, then left in a Gungan Sub. They went to Theed and rescued Queen Amidala, then flew in her Royal Starship. But the Hyperdrive was damaged, and they had to land on Tatooine. Qui-Gon had to buy a new hyperdrive, but he could not afford it. He met a boy named Anakin Skywalker, who promised to help them gain the money by competing in the Boonta Eve Podrace. Anakin won, and Qui-Gon managed to free him and took him with them back to Coruscant to see if the Jedi Council would accept the boy as a Jedi. Queen Amidala returned to Naboo, and Qui-Gon, Obi-Wan, Anakin and Jar Jar went with her. Qui-Gon and Obi-Wan fought the Sith Darth Maul, and Qui-Gon was killed. Obi-Wan killed Maul, and took Anakin as his apprentice.

The Qui-Gon Jinn minifigure has been made many different times. He first appeared in 1999, in a set called Lightsaber Duel. Right after Lightsaber duel was released, two more sets with him in it were released. The Qui-Gon Jinn minifigure had the classic Jedi robes torso, and brown legs. His head had slightly frowning eyes, with the eyes being made only out of black dots. He had a thin beard going from the top of one side of his face to the other. He also had two small moustaches that had pointed ends. The minifigure's hands and head were yellow, and he had the normal Qui-Gon Jinn hair, with two braids on the front, and one bigger braid down the back. He always came with a brown cape.

The second version of the Qui-Gon Jinn minifigure only appeared in one set, called Republic Cruiser. His head and hands were exactly the same, except that they were a tan color. His outfit was different, and was tan, with a different belt and robe design. It too had a brown cape, but it also had a brown hood, meaning that the Qui-Gon Jinn hair was never included with that minifigure. Also, the legs on that minifigure were tan, not brown.

The third version of that minifigure came out in 2011, and was much like the first version. He had the same brown legs, hair, and cape. but, the design on the torso piece was once again different, wearing the new design of the Jedi robes (the same torso piece appeared on the Obi-Wan Kenobi minifigure in 2011). The head and hands were again tan, and the head piece was much different. The face painted on the head piece featured the new version of eyes, and had a darker shade of brown on the beard and moustache. Also, the moustache connected, and his eyebrows were in a different position.

Qui-Gon appears in Lego® Star Wars: The Video Game throughout every level of Episode 1 as a playable character without using freeplay. He joins in with his apprentice, Obi-Wan Kenobi and dies at the end of the game after being mortally wounded during a lightsaber duel with Darth Maul. He is the first character that the player plays as, and will the player will always start as him when they turn on the game. 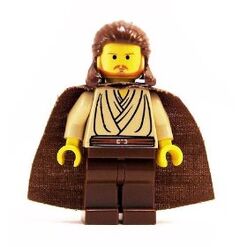 The first version of him 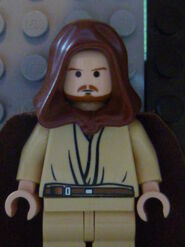 The second version of him 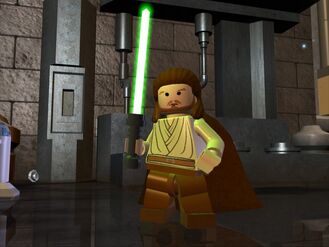 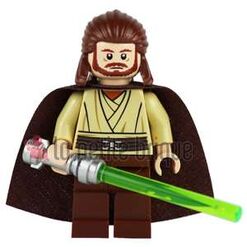 The third version of him. 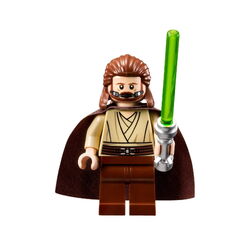 The fourth version from 9499 Gungan Sub 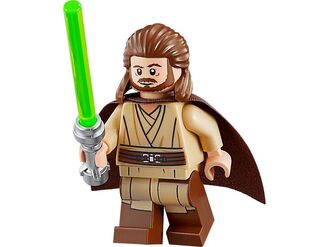 The fifth version of him 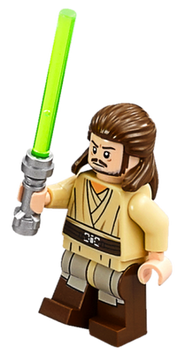 The sixth version of him