Mace Windu is a Jedi Master. He also was a member of the Jedi Council.

Windu was a powerful swordsman, even inventing his own lightsaber form of combat, known as Vaapad. One of Mace's apprentices was the Jedi Depa Billaba. Mace Windu was killed when he tried to arrest Chancellor Palpatine in Episode III. Mace deflected Palpatine's Sith lighting, but Anakin Skywalker cut off his lightsaber hand and Darth Sidious struck the defenceless Mace with force lightning and was launched out of the building's broken glass window onto the street miles below.

Mace Windu has four different minifigures made of him. Three depict him from the Star Wars movies, and the other depicts him in the Clone Wars. The difference between the two Windu minifigures are that the old one has a gray torso instead of a tan torso, and the minifigure heads look different. The new one also has dark tan legs, not tan and gray legs.

The second version of this minifigure, based on Windu's appearance in the Animated Clone Wars series was included in two sets from the Star Wars: The Clone Wars line: in the Republic Attack Shuttle set, as well as in the Mace Windu's Jedi Starfighter set. 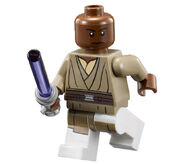 Lego mace windu (no cape)
Add a photo to this gallery
Retrieved from "https://legostarwars.fandom.com/wiki/Mace_Windu?oldid=34829"
Community content is available under CC-BY-SA unless otherwise noted.