Jango Fett was a bounty hunter before the Clone Wars and was the genetic template of the Grand Army of the Galactic Republic.

Sometime after the Blockade of Naboo, Jango Fett was recruited by Count Dooku, a former Jedi now leader of the Confederacy of Independent Systems and under the alias of "Tyranus", to be the genetic template for the Republic's army of clone troopers, which were to be grown in secret on the planet Kamino. Fett agreed, but asked for a completely unaltered clone for himself. This clone would become the bounty hunter Boba Fett.

Fett was again recruited by the Separatists ten years later. Nute Gunray, Viceroy of the Trade Federation, wanted the Senator for Naboo, Padmé Amidala Amidala, dead before he committed to the Separatist movement. Fett enlisted the help of fellow bounty hunter Zam Wesell, and together they attacked the senator's ship as it arrived on Coruscant. Unfortunately for them, Amidala had used a decoy and they were forced to try again, this time using deadly kouhuns.

Amidala's Jedi protectors, Obi-Wan Kenobi and his padawan Anakin Skywalker, saved her from this as well and tracked Wesell to the Outlander Club. Fett was forced to kill her before she gave the Jedi his name, silencing her with a saberdart from Kamino. Kenobi, now determined to track down Fett, journeyed to Kamino and discovered the new clone army. After meeting with Fett and realising that he was the bounty hunter after the Senator, Kenobi attempted to take Fett back to the Jedi Temple. After a fight in the rain, Fett escaped aboard the Slave I and travelled to Geonosis, unaware that Kenobi had attached a tracking device to the hull of his ship.

Kenobi arrived in the system minutes after Fett and the two began a dogfight in the planet's asteroid field. Kenobi faked his own ship's destruction and Fett continued down to the planet, believing Kenobi to be dead.

Kenobi, however, followed him, but was swiftly captured by the Separatists, who were based on the desert planet. Fett watched with Dooku, Gunray and Poggle the Lesser as Kenobi, as well as the Senator and Kenobi's apprentice, Skywalker, were sentenced to death in the Arena. Unbeknownst to him, hundreds of Jedi were in the arena crowds and a massive battle ensued between the Jedi and the Confederacy's droids.

During the battle, Fett flew down to the floor of the Arena and attempted to take on Jedi Master Mace Windu. His jetpack was damaged by a rampaging monster in the Arena, however, and Windu was able to behead him with one slice of his lightsaber. Jango Fett was dead, and his son swore to kill Windu for slaying his father.

Jango Fett was first released in 2002 in the set 7153 Jango Fett's Slave I. In the set, he had plain blue legs and a mostly grey torso, with light grey printing to depict his Mandalorian body armour. His arms were blue and his hands were black. His head was mostly solid black, with some printing to depict his stern face. His headpiece was a combined helmet and jetpack piece, in blue and silver.

A variant of Fett as Santa Claus was released as part of 75023 Star Wars Advent Calendar. In the set, he had red legs, hips and torso, with printing on the latter similar to that of the 2013 variant, in a deeper shade of red. His head and helmet piece were the same as the 2013 variant, though in place of a jetpack he had a sack containing presents.

Jango and Boba Fetts in LSW 3 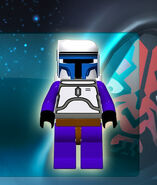 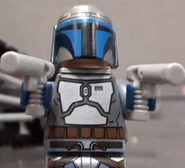