Jabba Desiljic Tirue (or Jabba the Hutt) ruled over a successful criminal empire based on Tatooine before, during and after the Clone Wars. He sought help from the Jedi after his son Rotta was kidnapped and became a temporary ally of the Galactic Republic. Years later Bounty Hunter Boba Fett delivered Rebel smuggler Han Solo to him, provoking a team of Rebels to rescue their friend. After failing to execute them, Jabba was strangled to death by Princess Leia aboard his Sail Barge, the Khetanna.

The first Jabba minifigure was released in 2003, in the Jabba's Palace set. He consisted of four parts; body/head, arms, and tail. The minifigure was all light green with no distinguishing marks other than curved lines in the mold to give the appearance of sagging skin. The minifigure also showed his navel.

Nine years later, in 2012, Lego made another version of the Jabba the Hutt minifigure. This one was much more detailed, having many different colors and a detailed face. The minifigure's arms could move up and down-like the previous version-but it's head could rotate 360 degrees as well. The minifigure had red eyes and a green and tan body. Curved lines were printed on to give the appearance of skin this time tough. Ironically, this minifigure was first included in a set by the same name: Jabba's Palace.

Jabba has also appeared in the film LEGO Star Wars: The Padawan Menace in the Mos Eisley Cantina and at his palace where he sentences C-3PO, R2-D2 and various padawans to death. 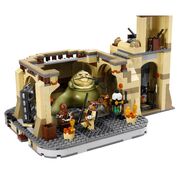