Boba Fett, Palpatine, Greedo, Darth Vader (formerly), Jabba the Hutt, Stormtroopers, Kylo Ren
Han Solo was a Corellian smuggler and hero of the Rebellion, fighting in the Battle of Yavin, the Battle of Hoth and the Battle of Endor. He has appeared in many Lego sets and most of the Lego Star Wars games.

Han Solo was an Imperial fighter pilot turned smuggler after the Clone Wars. He won his ship, the Millennium Falcon, in a game with his friend Lando Calrissian. He flew the ship with his Wookiee copilot Chewbacca. They were employed by Obi-Wan Kenobi to himself, Luke Skywalker, R2-D2, and C-3PO to Alderaan. Upon finding the planet had been destroyed by the Empire, Solo helped them to escape and helped them destroy the Death Star, joining the Rebellion afterward. After the Rebels' defeat on Hoth, he took Princess Leia to Bespin and met up with Lando Calrissian, who double-crossed them. Han was frozen in carbonite and taken to Jabba the Hutt by Boba Fett. Later he was rescued by his Rebel friends and helped kill the Hutt. Later he helped at the Battle of Endor, destroying the Second Death Star's shield generator and allowing the Rebels to destroy the battle station.

There are multiple versions of Han Solo as a minifigure.

Han Solo in his Mos Eisley Cantina variant was released in 2000. In 2004, his legs were a darker blue. In 2011, the minifigure had a new, flesh-colored head and light blue legs. But in his 2014 variant, he had pockets on his vest and had dark blue legs once again.

Han Solo has had six Echo Base variants. In 2000 he had light-tan legs, a blue coat with printed macro binoculars. The next variant was the same but had flesh-colored skin. In 2006, he had brown pants. The first three had parka hoods. The 2010 variant was lightly dressed. Han had a white shirt, a thin blue jacket, and brown pants. The next year, he was warm again and had a new hood piece. In 2013, his variant was brown with white boots printed. He also had goggles and a face mask printed on his face. 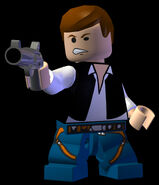 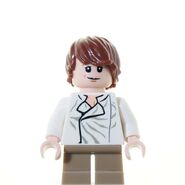