Geonosians are insectoid warriors who lived on the planet Geonosis.

During the Clone Wars, they supported the Confederacy of Independent Systems. They were armed with sonic Blasters and lived in large hives. There are two current versions of the Geonosian minifigure; one with wings, and one without wings. Notable Geonosians include Poggle the lesser, Sun Fac and the Queen Karina of the Geonosians. Geonosians can be maintained after they're dead when parasites produced by the queen make them fight. They use different kinds of weapons, such as Sonic Cannons. They drive Geonosian Starfighters (which were included in 2 sets). 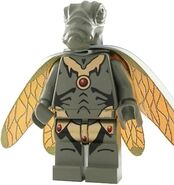 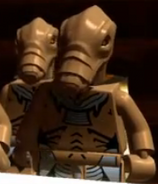