Start a Wiki
This article is about the minifigure. You may be looking for the game level.

Darth Maul was a Dathomirian Zabrak Sith Lord and apprentice of Darth Sidious. He had two brothers named Feral and Savage Opress.

Darth Maul was born on Iridonia, but he grew up on Dathomir with other Zabrak Nightbrothers. The Sith Lord Darth Sidious took young Darth Maul from there at an early age. In Maul's early training Darth Sidious told him the ways of the Dark Side. Maul didn't even know that his master was the apprentice of Darth Plagueis. After Sidious killed Plagueis, Maul became his official apprentice. They continued the Rule of Two, which allowed only one Sith Master and one Sith apprentice. Maul grew up to become a dangerous Sith lord and was chosen to use his special double-bladed sith lightsaber. He eventually got his own ship called the Sith Infiltrator, with his own custom speeder bike called Bloodfin.

Maul's first mission was to put the criminal organization Black Sun in 33 BBY. Later Sidious pitted him against the force-sensitive Drovian Silus, who was a gladiator.

In 32 BBY he was ajects to Viceroy Nute Gunray and Rune Haako on the Blockade of Naboo after Queen Amidala escaped. Darth Maul battled Qui-Gon Jinn on Tatooine to kill Padmé Amidala and young Anakin Skywalker. But Qui-Gon managed to escape the Sith Lord. Qui-Gon Jinn then spoke with the Jedi Council to find out that the Sith lords had returned from a thousand years. Maul later dueled him and his padawan Obi-Wan Kenobi on Naboo. Maul killed Qui-Gon Jinn, but in the end, Obi-Wan cut him in two halves and he fell into the reactor pit. Although he was killed by the Jedi, his body started tumbling down to the reactor pit and was disintegrated.

11 years later Maul was found during the Clone Wars by his brother Savage Opress on Lotho Minor. When Savage did find him on that planet, he saw his lost brother with six cybernetic legs. Maul had to use this apparatus because of what happened 10 years back when Maul was cut in two halves by Obi-Wan Kenobi. When Darth Maul figured out that Savage was his brother, the two worked together to try and defeat their nemesis, Obi-Wan Kenobi.

They later encountered Kenobi several times, on Raydonia and on Florrum. On Florrum, Opress killed Adi Gallia, but Kenobi managed to escape each encounter alive. After their retreat from Florrum, the Sith brothers got in contact with Pre Vizsla and his Death Watch. They helped the Mandalorians gain the support of the Black Sun, Jabba the Hutt's crime empire and other criminal organizations. With the help of the criminal underworld, Maul, Opress and the Death Watch started a series of attacks on Mandalore so that Vizsla could present himself as a savior. Vizsla took over the planet and imprisoned Duchess Satine, the leader of the New Mandalorians. Later, Maul took actions against Vizsla, after the later betrayed him and imprisoned him. Maul escaped from prison and challenged the Death Watch leader to a duel. Maul killed him during this fight and became Mandalore. Later, Obi-Wan Kenobi arrived on the planet to free Satine from prison. But Maul stopped him, killing Satine to hurt Kenobi. After that, Darth Sidious arrived on the planet and battled Maul and Savage. Sidious killed Opress and subjected Maul to force lightning. He spared his former apprentice's life because he had certain plans with him.

Darth Maul, along with other sith, is one of the only sith that has a Lego Star Wars level named after them.

Darth Maul has another brother trained in the dark ways of the force.

The original Darth Maul variant had black legs and a black torso, with white printing to depict his Sith assassin robes. The figure came with a cloak and a black hood, and the head was mostly black, with red printing to depict his Sith tattoos. It appeared in the sets 3340 Star Wars 1, 7101 Lightsaber Duel, 7151 Sith Infiltrator, and 7663 Sith Infiltrator.

The Darth Maul minifigure was redesigned for a release in 2011. This figure also had black legs and a black torso, with similar printing to the original variant, with a black cloak and hood as well. The most striking difference between the two variants was the head; this variant had more detailed printing and a new headpiece to depict his Zabrak horns. It features in the set 7961 Darth Maul's Sith Infiltrator.

This variant had bright red legs and a red torso with printing to mimic a Santa Claus costume. It features in the set 9509 LEGO Star Wars Advent Calendar.

This variant, again, had black legs but a red torso with printing to depict the Sith tattoos on his open chest. His head was similar to the 2011 variant with a menacing snarl. It was released in the exclusive 5000062 Darth Maul set.

This variant had exclusive, grey legs designed to mimic the mechanical ones given to him by the Nightsister Mother Talzin. His torso was red, with printing similar to the previous variant to depict his Sith tattoos. His head was red and black, with printing to depict his tattoos, but had larger eyes to depict his appearance in the Clone Wars TV series. It features in the set 75022 Mandalorian Speeder.

Both the Darth Maul minifigures

The old Darth Maul (with hood on)

Another picture of the new Darth Maul minifigure

Darth Maul with some photo editing... 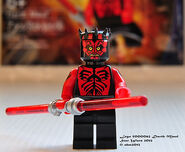 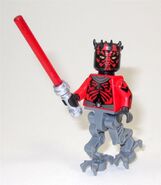 Darth Maul in his santa costume
Add a photo to this gallery
Retrieved from "https://legostarwars.fandom.com/wiki/Darth_Maul?oldid=34626"
Community content is available under CC-BY-SA unless otherwise noted.