This article is about the minifigure. You may be looking for the game level.

Count Dooku was a powerful Jedi and apprentice to Master Yoda who left the Jedi Order to become a Count on his home planet of Serenno. After the supposed death of his first apprentice, Darth Maul, Darth Sidious took Dooku on as his apprentice. Sifo-Dyas employed the Kaminoans to create a clone army for the Republic. Later, Dokku took this cloning process over and killed Sifo-Dyas. The Clone Army was part of a plot for Darth Sidious. Dooku led the Separatists in the Clone Wars afterwards. He was killed by Anakin Skywalker in 19 BBY during the Battle Over Coruscant aboard the flagship of General Grievous, the Invisible Hand. 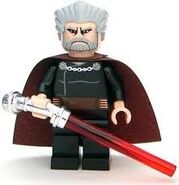 The 2013 variant
Deutsch
Community content is available under CC-BY-SA unless otherwise noted.
Advertisement