Clone Pilots are Clone Troopers that were specially trained as pilots. There were two phases of armor that Clone pilots used: Phase I, and Phase II.

The Lego creators also made the clones with both Phase I and Phase II armor.

In the Clone Wars line, a second Clone Pilot minifigure was used, this one was based on the appearance of the Clone Pilots during the Clone Wars, and how they were shown in the animated Clone Wars series. They had the same style helmets as the version II Clone Troopers but had yellow above their visors and on their fin. The figures also had red insignias on either side of their helmets. Their breathing device is located closer to their heads than the Phase II armor. Other than having the red and yellow on their helmets, and the breathing device, their minifigures are exactly the same as the normal Clone Trooper ones.

The uniform that they wear on the first Lego® minifigure is actually the less common of two uniforms worn by Clone Pilots. The uniform used by Lego® has an enclosed helmet which was typically worn by V-Wing pilots because the V-Wing has no life support. The other uniform featured in the films was the same except for the helmet, which is open, more like that of a Rebel Pilot, this uniform is being used for a Lego® minifigure in 2010 sets such as 8088 ARC-170 Starfighter and 8096 Palpatine's Shuttle. 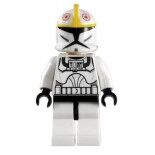