This minifigure is of Boba Fett when he is a bounty hunter.

The minifigure has the Repainted Mandalorian Armor with a jetpack. The head underneath is black, unlike the Jango Fett minifigure, who has a face. The black head makes the appearance of a black visor for the helmet, and when the helmet was on, it looked like a T-shaped visor. The minifigure's helmet and jetpack were connected as one piece and were the same color of green that was used on the torso piece. The helmet had a brown outline surrounding the visor, and yellow markings could be seen on the side of the helmet. The legs and arms were all light-grey, and the hands were a dark-grey color. The torso piece had four printed pieces of green armour over the same light-grey torso color.

Lego once made a contest, where the winner would receive a bronze figure of Boba Fett.

In 2010, a new, extremely more detailed version of the minifigure was released. The helmet was similar to that of the Mandalorian minifigure's one. This new minifigure also featured a printed head. It came with a brown cloth shoulder pauldron, and an attachable grey antenna for his helmet. The helmet has printed "scratches" on it, to make the appearance of scratched paint on the helmet. Instead of having a black head underneath, the black visor is printed on, along with a crimson outline around it. An attachable jetpack could be placed on his back, and it was the same color as the helmet. On the torso is the same printed armor as the previous minifigure, except that it was tweaked a little bit, and it was a darker green color with scratches on it. The torso also now had a brown braid going down the side, and a brown belt at the bottom. The legs and arms were now blue instead of grey, but the hands stayed the same grey color.

In 2012, LEGO improved the Boba Fett minifigure again. It was the same as the 2010 version, but with some small changes. The shoulder pauldron that comes with the minifigure was the same design, but a greenish color instead of the previous brown. The hip color was also changed from crimson to dark green. The main difference in the minifgure was that decals were printed onto the minifigure's legs. Two blue pockets were printed on the legs as well as tan items. On the tip of the jutting out, feet of the minifigure were small pieces of metal, possibly to give the appearance of steel-toed boots. 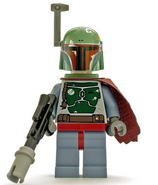 A back view of the 2012 minifigure 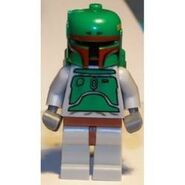