Blaster Pistol
Boba Fett was known as, arguably, the best bounty hunter in the galaxy after the Clone Wars conflict. He was the only cloned "son" of Jango Fett, an infamous bounty hunter hailing from the planet Concord Dawn.

Sometime after the Blockade of Naboo, Count Dooku, Sith apprentice of Darth Sidious and under the Sith alias of Darth Tyranus, encountered the infamous bounty hunter Jango Fett on one of the moons of the planet Bogden. Impressed by Fett's prowess, he chose him as the template for a Clone Army for the Galactic Republic in preparation for the Clone Wars, which Dooku and his master were planning. Fett agreed, and contacted the cloners on Kamino, allowing himself to be the template.

Aside from his considerable pay, Fett demanded only one thing; an unaltered clone for himself. This clone would not be tampered with, being a perfect replicate of Fett, complete with no growth acceleration. Fett was given the clone "son" and raised him as his own. This unaltered clone was christened Boba Fett.

Over the years preceding the conflict, Jango trained his son to become a bounty hunter like himself. The pair lived on Kamino for several years, with Jango occasionally going off on jobs.

Soon before the advent of the Clone Wars, Jango was assigned by Viceroy of the Trade Federation Nute Gunray to kill senator Padme Amidala of Naboo, who had humiliated Gunray several years earlier after the failed blockade of the planet where Amidala served as queen.

After several failed assassination attempts by Fett's associate Zam Wesell, Jedi Knight Obi-Wan Kenobi tracked a Kaminoan saber-dart to Kamino and to the Fetts. After inspecting the troops, Kenobi encountered Fett and asked him about Coruscant, briefly spotting Fett's Mandalorian armour. The Jedi soon left, but Jango felt uneasy and decided to leave the planet with Boba.

As Boba was prepping their ship, the Slave I, Kenobi attempted to arrest Jango and take him to the Jedi Council. After a brief fight, the Fetts assumed Kenboi to be dead after a fall from the landing platform into the stormy waters swirling below. In reality, however, Kenobi had survived and had attached a homing device to the hull of their ship. Blissfully unaware, the pair blasted off to the Separatist headquarters on the planet Geonosis.

The Fetts arrived at Geonosis unharmed, but Kenobi was not far behind. After a brief but memorable fight in the planet's deadly asteroid field, the Fetts believed Kenobi to be dead again and proceeded to rendezvous with the numerous Trade Federation starships landed on Geonosis.

Kenobi discreetly followed them to the planet's surface but was quickly captured by the Geonosians, who were under the influence of Poggle the Lesser, one of the Separatist leaders. Desperate to save him, Anakin Skywalker and Padme journeyed from the nearby planet Tatooine, where Skywalker had been searching for his mother, Shmi, to Geonosis in a bid to save Skywalker's master and father figure.

Coming across the planet's huge droid foundries, the pair were separated and captured individually. The senator was forced to sit through a mockery of a trial before all three were sentenced to execution and were taken to the Petronaki Arena. There, they encountered three savage beasts; an Acklay, a Reek and a Nexu, as Boba watched on from Dooku's private box.

As the trio was surrounded by Droidekas, Jedi Master Mace Windu made an unexpected appearance. Holding his lightsaber by Jango's throat, Boba watched as hundreds of Jedi ignited their lightsabers and began the battle in the arena below, against an onslaught of battle droids fresh from the foundries.

As the battle raged, Jango stayed by Dooku's side and Boba sat with him. He watched as Coleman Trebor attempted to assassinate Dooku before Jango shot him down and his lifeless body fell to the arena floor.

Seeing an opportunity, Jango used his jetpack to fly down to the arena floor. Boba watched as the Reek damaged Jango's jetpack and left him all but defenseless against Windu, who cut off the bounty hunter's head with one clean cut.

In the aftermath of the arena battle, Boba found his dead father's helmet and picked it up. With it, he picked up his father's legacy and vowed to be just like him.

As the Clone Wars raged between the Galactic Republic and the Confederacy of Independent Systems, Fett vowed to avenge his dead father. He joined up with bounty hunter Aurra Sing and Bossk, who promised that he could kill his father's killer, Mace Windu. Posing as a clone cadet, Fett made his way onto a Republic cruiser, attempting to assassinate Windu. After several failed attempts, he was forced by Sing to destroy the cruiser.

Trapped in the wreckage with Anakin Skywalker, Windu eventually was rescued and survived the ordeal. Fett was captured by Republic forces and was spoke with Windu before he was taken into a detention center. As he looked the Jedi in the eye, he said that he could never forgive him for what he had done to his father.

Hunt for the Millennium Falcon

After the Clone Wars, Fett quickly earned a reputation as one of the best bounty hunters in the galaxy, rivaling even his late father. Three years after the Battle of Yavin, Fett was one of several bounty hunters who were requested to come aboard the Super Star Destroyer Executor by Darth Vader.

Vader, formerly Anakin Skywalker, informed them that he wanted the Millennium Falcon, the personal ship of a smuggler and Rebel hero Han Solo, who was travelling with his Wookiee co-pilot Chewbacca and Princess Leia Organa, both traitors to the Empire.

Aboard the Slave I, Fett tracked the Falcon to Cloud City, a mining colony in the skies above the planet Bespin. There, the Rebels met up with Solo's friend Lando Calrissian, who was forced to betray him by the Empire, who came just after Fett.

Solo was frozen in carbonite and Fett was given authorisation to take him to infamous Hutt gangster Jabba the Hutt on Tatooine, who had placed an enormous bounty on the smuggler's head for jettisoning his cargo once Imperial troops boarded his ship.

Fett took Solo to the gangster's palace on Tatooine. There, Jabba hung Solo on his wall, calling him his "favourite decoration". Fett stayed at the palace for a while afterward, admiring his trophy.

One year later, several of Solo's friends tried and failed to rescue Solo. The final attempt by Luke Skywalker resulted in the death of Jabba's Rancor, a vicious monster beneath his palace, which angered the Hutt so much that he sent the Rebels out into the Dune Sea to be devoured by the Sarlacc in the Great Pit of Carkoon.

As the Rebels began to fight back, Fett flew to the nearest skiff and tried to kill Skywalker. The young Jedi sliced his weapon in half and Solo, free from the carbonite and still blind from hibernation sickness, accidentally activated his jetpack with a spear, sending him crashing into the side of Jabba's sail barge, the Khetanna.

Dazed, Fett rolled into the pit and into the monster's mouth. The almighty Sarlacc belched as he disappeared into its enormous, gaping maw.

Eventually, Fett escaped from the beast alive, his armour having protected him from the creature's digestive fluids. It took him a long time to recover from his traumatising ordeal, and even longer to regain his reputation.

This variant depicts Fett as he was in Episode II. It has short blue legs, a blue torso with printing to depict his simple garb, darker blue arms, and yellow hands. His face is yellow with an indifferent expression and he has long black hair. It appears in the set 7153 Jango Fett's Slave I.

This variant also depicts Fett as a boy, as he was in Episode II. This variant has slightly darker, short legs and a slightly darker torso with more detailed printing than the original. His arms are still a dark blue and his hands are skin coloured. His face shows a puzzled expression and he retains the same hair as the original. It appears in the set 75023 Star Wars Advent Calendar.

This variant depicts Fett as he was in Episode V. It has light grey legs and a mostly green torso, with printing to depict his Mandalorian armour. His arms are light grey and his hands are a slightly darker grey, holding a blaster. His head is completely black and his helmet and jetpack are one piece that fits over his head. It appears in the sets 3341 Star Wars 2, 4476 Jabba's Prize, 6209 Boba Fett's Slave I and 7144 Slave I.

This minifigure was identical to its predecessor, except for the fact that it had detailed printing on the legs. It appears only in the set 10123 Cloud City and is very rare and valuable.

This variant has light blue legs with red hips, a green and grey torso with detailed printing depicting his Mandalorian armour. He has light blue arms and grey hands holding a blaster. His head shows his grinning face and multiple scars, while his helmet resembled a Clone Trooper helmet with green and red printing with numerous battle scars. The jetpack piece is green and is independent from his helmet. The figure also comes with a ragged brown half-cloak that goes over one shoulder. His blaster is also unique, with a grey technic piece on the end to accurately depict his personal gun. It appears in the set 8079 Boba Fett's Slave I.

This variant is identical to its predecessor, except that it has detailed printing on the legs and has a light brown coloured cloak, as well as a different blaster that makes use of a black lightsaber hilt. It appears in the set 9496 Desert Skiff.

This miniature variant of Boba Fett appeared in the set 3866 Battle of Hoth. Predominantly green and grey, it had detailed printing to depict the bounty hunter's helmet and Mandalorian armour.

The variant with printing on the legs 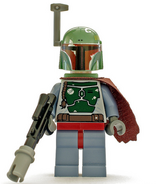 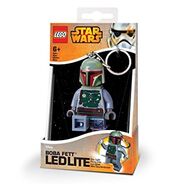 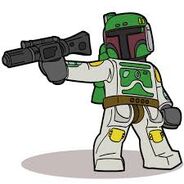 10,000 variants of this minifigure were released in 2010. They resembled the original variant but was almost completely white.

This variant is the rarest and valuable variant of the Boba Fett minifigure. The minifigure is completely bronze and is made to look like the original variant of the minifigure. Two were given away randomly on May 4th 2010 by the Lego® Shop as part of a promotion, and they remain the only two in the entire world.

This minifigure was given out as part of a competition in 2010 and at Celebration V. It was made from 14-carat gold and resembled the new design of Boba Fett.

This variant was also given out as part of the same competition in 2010. These also resembled the newer Boba Fett, and only two were ever made.

This promotional maquette of Boba Fett was six inches tall and, though not made of actual Lego, depicted Fett in his original Lego variant. 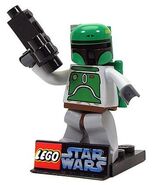