Anakin Skywalker, later known as Darth Vader, was a Jedi, then a Sith, then later redeemed back to the light side because of his son Luke Skywalker. He turned to the Dark Side because of his fear of loss. He was the son of Shmi Skywalker, and was the "Chosen One". He wielded a blue lightsaber.

Anakin originally lived with his mother as a slave on Tatooine, being born a slave. When he was nine, he was enslaved to Watto and worked at Watto's Shop. It was at this shop that he first met Jedi Master Qui-Gon Jinn, Jar Jar Binks, and Padmé Amidala. Anakin Skywalker often participated in podraces and he also built his own podracer. He won the Boonta Eve Classic podrace, thus winning his freedom through Qui-Gon Jinn's bet with Watto. He participated in the Battle of Naboo in 32 BBY, destroying the Droid Control Ship which then deactivated the Trade Federation's ground forces. This turned the battle into a victory for the Naboo and their allies, the Gungans.

Anakin trained under the tutelage of Obi-Wan Kenobi for 10 years. After 10 years, he met up with Padmé Amidala and foiled an assassination attempt on her. He returned to Tatooine just to only watch his mother die. He later was led to the planet Geonosis to rescue his master but was captured himself, along with Padmé, and all 3 were taken to the execution arena. Suddenly 212 Jedi arrived at the scene, followed by 10,000 clones. The trio raced after the Sith Lord Count Dooku, who was cornered in his hangar. Anakin, Obi-Wan, and Dooku started duelling. The duel's results were: Obi-Wan being wounded, Anakin losing his arm at the elbow, both were saved from a giant pillar by Yoda, and Dooku escaped unharmed. Anakin got a robotic arm and married Padmé in a secret ceremony on Naboo.

The Clone Wars he married Padmé Amidala in a secret wedding ceremony on Naboo. He then went on many dangerous missions, such as Yavin 4 and Jabiim. He took on an apprentice named Ahsoka Tano in 21 BBY, who he affectionately called "Snips". She, in return, used to call him "Skyguy". He would duel adversaries such as Durge, General Grievous, Asajj Ventress, Count Dooku, and Dooku's Dark Acolytes. Anakin also managed to return Rotta to his father, Jabba the Hutt. One of his missions involved him destroying the Malevlolence, a superweapon under the command of General Grievous. Skywalker also took part in the Battle of Mon Calamari. Towards the end of the Clone Wars, Skywalker's apprentice, Ahsoka Tano, chose to leave the Jedi Order, as they accused her of being responsible for a bomb attack in the Jedi Temple.

Three years into the war, Anakin went on a rescue mission with Obi-Wan to save Chancellor Palpatine, who had been abducted from Coruscant by General Grievous. In this, Anakin had a rematch with Dooku and defeated him. Palpatine goaded the young Jedi to kill the Sith, which he did. Then, Palpatine recommended Anakin to become a member of the Jedi Council, which arose Jedi suspicions. They gave him a seat but denied him the Master title. He then met Palpatine who expressed his disapproval, planting in his distrust of the Jedi. He then told him about Darth Plagueis and his power to prevent people from dying, before revealing that he himself was Darth Sidious, Dark Lord of the Sith. Anakin then relayed the information to Mace Windu who then organised a strike team to arrest the Chancellor. But he had second thoughts and flew his starfighter over to the Senate and saw Mace holding Palpatine at blade point. Palpatine fired Force Lightning at the Jedi Master and both combatants pleaded for his loyalty. Anakin then panicked and drew his lightsaber, cutting off Windu's hand. Palpatine then killed the Jedi Master with lightning and Anakin, now involved in this, had nowhere to go. Sidious then convinced him further to join the Sith and Anakin then complied. Sidious then gave him a Sith name and at this point, Anakin Skywalker was no more and Darth Vader was born. Path of the Sith resulted in a duel with Obi-Wan. Vader lost this duel, which resulted in him having to permanently wear body armor and a life-support system. Vader soon became a feared leader of the Empire.

Same as Anakin (See above)

Darth Vader tortured Princess Leia after he lost the Death Star plans and duelled Obi-Wan Kenobi while Luke Skywalker with Han Solo saved Leia. Then the Rebel Alliance attacked the Death Star. Vader participated in this battle and was defeated because he was shot down by Han Solo.

Darth Vader commanded the forces of the Empire during the Battle of Hoth and the Alliance was defeated. While the stormtroopers searched the Millennium Falcon into the asteroids, the Sith Lord received a new assignment from the Emperor. Palpatine wanted to catch Luke Skywalker. Vader proposed to transfer Luke to the dark side of the Force. The Emperor agreed, noting that Luke would be "a big advantage." Vader teamed up with Boba Fett and Lando Calrissian, who were to help him catch Luke and Han. Han was frozen in carbonite, and Luke fought Vader. Not knowing the opponent, Luke was not ready for a fight with a powerful and experienced Vader, who in the course of battle cut off his right arm. There Vader revealed to Luke the secret of their relationship.

4 years after the Battle of Yavin, the construction of the Death Star II is nearing completion. Vader watched the final stage of construction and soon felt Luke Skywalker aboard the shuttle, moving to the moon of Endor. On Endor, Luke gave himself up the imperial troops, and he was taken to Vader. Sith once again tried to convince Luke to join the dark side, but this time Vader has been guided by the desire to protect his son. When this attempt failed, Vader took Luke to the Emperor Palpatine. Last decisive battle between Luke Skywalker and Darth Vader came aboard the second Death Star in the presence of the Emperor. Luke tried to get to the start of light left over from what was once Anakin Skywalker. When Vader learned that he had a daughter, he promised to persuade her to serve the dark side. Using anger, Luke attacked Vader and cut off his hand. Then, looking at his own hand, Luke realized that this victory only brings him closer to the dark side. Palpatine attacked Luke with Force Lightnings. Writhing in pain, Luke asked his father for help. Vader raised his remaining hand of the Emperor and threw him into the Death Star's reactor shaft, where it exploded in a storm of dark forces. Vader was struck by the power of the flash power Palpatine that brought down his life-support system. He briefly survived the Emperor. In the last moments of his life, he begged Luke to remove his mask so that he could see with his own eyes. Vader turned back to the light side of the Force and became Anakin Skywalker, the Chosen, who brought the balance of forces, killing Palpatine and dying.

Anakin Skywalker has appeared many times in Lego Star Wars. In Episode I sets he normally has a freckled face, short legs, a tan tunic and either a light brown hair piece or a flight helmet. In Episode II sets he has a shorter hairpiece, Jedi robes and carries a lightsaber. In Episode III sets he both appears as a Jedi and as a burnt version of himself after his duel with Obi-Wan on Mustafar. Darth Vader has also appeared many times in LEGO sets. In each sets, he has the same removable helmet, and in later sets, he has a more detailed torso than in previous sets, with an added utility belt. He always carries a red lightsaber and sometimes comes with a cloak.

The game's successor was Lego Star Wars II: The Original Trilogy, which centered around the Original Star Wars Trilogy. This video game was released in 2006. This game includes 2 versions of Anakin: as Darth Vader and as the ghost of Anakin. The player could also get access to all the playable characters from Lego Star Wars: The Video Game by using the Old Save feature. 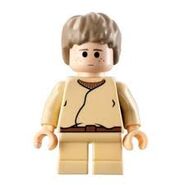 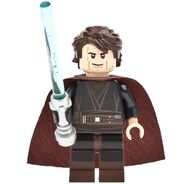 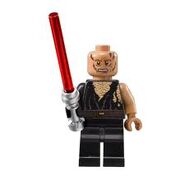 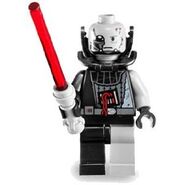 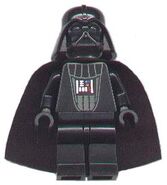 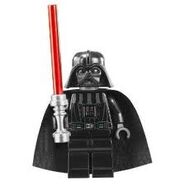 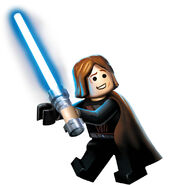 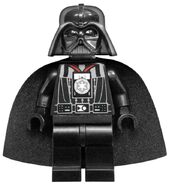 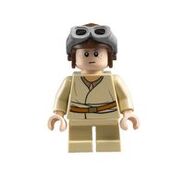 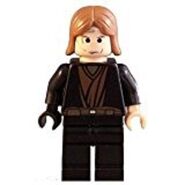 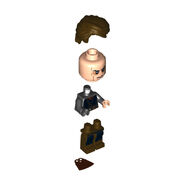 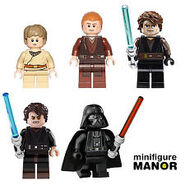 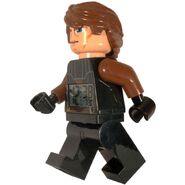 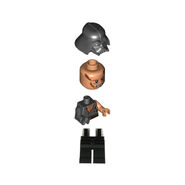 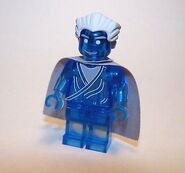 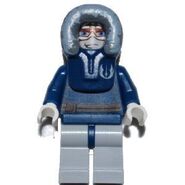 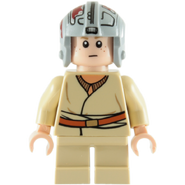 Pilot Ani
Add a photo to this gallery
Retrieved from "https://legostarwars.fandom.com/wiki/Anakin_Skywalker?oldid=34707"
Community content is available under CC-BY-SA unless otherwise noted.