9516 Jabba's Palace is a set with Jabba the Hutt, Gamorrean guard, Princess Leia (Boushh), Oola, Han Solo, Han Solo in carbonite (2012 redesign), Chewbacca, B'omarr Monk and Salacious B. Crumb. It is based on the place of the same name from Episode VI-Return of the Jedi.

This set includes ten minifigures, of which eight are new figures. The three old minifigs are the old Chewbacca from 1999 and the B'omarr Monk which was included with the original Jabba's Palace set in 2003. Han Solo (Carbonite) and the B'omarr Monk come without accessories and Chewbacca includes handcuffs. This set also includes a new Han Solo, which is based on the Han Solo figure that was included with the 8097 Slave I set in 2010 but with a redesigned headpiece. The Gamorrean Guard is completely new and includes a vibro axe. It is also included in the set 75005 Rancor Pit released in 2013. Oola is also an all-new figure, and features a double-sided head. The Princess Leia (Boushh) is completely new, too, and includes a helmet, a thermal detonator and a staff. Under the helmet is Princess Leia's face, which is double sided. A Princess Leia hairpiece for additional portrayal is also included. Bib Fortuna is also a new minifigure. It includes a cloak and a headpiece meant to show his head tails, which is identical to the original Bib Fortuna's headpiece from 2003. The face and the torso are redesigned and the figure's skin colour is darker than the original Bib Fortuna's skin colour from 2003. Also included is an all-new Jabba the Hutt minifigure, which is larger than the original version fron 2003 and is one of the largest Lego Star Wars minifigures to date. The set also includes Salacious B. Crumb, Jabba's pet Kowakian Monkey Lizard. Crumb is an all-new minifigure and hasn't appeared in any set before.

At Jabba's Palace™ on Tatooine, Princess Leia is disguised as Boushh as she and Chewbacca try to rescue the carbonite-frozen Han Solo. Can she get past the roof-mounted missiles, defense guns and surveillance equipment to reach them? Or will Jabba and his motley band of followers capture the princess and entrap her beneath Jabba's sliding throne? Includes 9 minifigures: Jabba, Salacious Crumb, Bib Fortuna, Gamorrean Guard, Oola, Han Solo, Princess Leia in Boushh outfit, Chewbacca and B'omarr Monk. 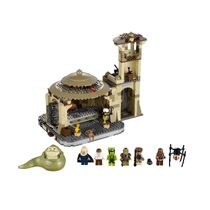 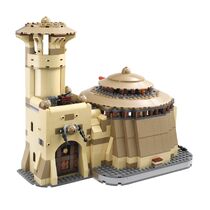 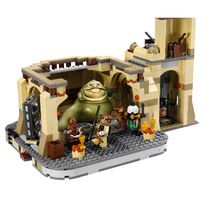 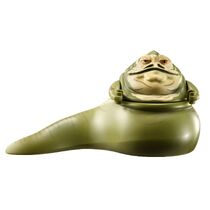 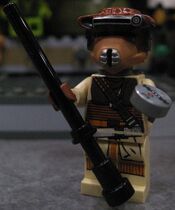