Lego Star Wars Wiki
Register
Don't have an account?
Sign In
Advertisement
in: The Clone Wars, Sets, 2009,
and 5 more

The 8015 Assassin Droids Battle Pack is a set that was released in 2009. It includes a speeder, three silver Assassin droid minifigures and two black Elite Assassin droid minifigures. The speeder could sit two figures. In the front, a droid could sit, and hold onto a steering device. In the back, a droid could sit in the opposite direction, where a gun could be placed. On either sides of the speeder, two flick-fire missiles with a purple tips are put in. This set, like many other battle packs, is closely related to another battle back set- in this case, 8014 Clone Walker Battle Pack.

Unleash an army of destructive droids!

Programmed for stealth and destruction, assassin droids are used by gangsters, smugglers and crooks on every planet from Coruscant to Tatooine. Build up your own army of these silent, skilled and sneaky droids and send them out with their flick-missile-firing speeder on secret missions all across the galaxy! 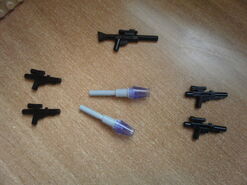 The weapons included in the set