The 8014 Clone Walker Battle Pack was a set released in 2009. On some places the set was released early, before Christmas 2008. It includes a Clone scout walker, three normal Clone troopers (which can be modified to make two normal clones and a clone commander) minifigures and a new Clone Gunner minifigure. It also includes accessories for the clones.

The set was a Battle Pack, and like many battle packs, it was associacted with another battle pack. In this case, it was the Assassin Droids Battle Pack.

The set included a clone walker that had many feaures. Inside the walker was two seats to sit two figures. On either side on the walker were grey flick-fire missiles, which could be pushed out the back to make the appearance of them "shooting out". The Walker was on two legs that could move.

March into battle with the Clone Army!

As the Clone Wars rage across the galaxy, the Republic army advances across the battlefields of hundreds of planets. Build up your army with the Clone Walker™, a tough 2-man vehicle with poseable legs and flick-firing missiles!

This is an official description which was taken from LEGO.com. Please do not modify it.O 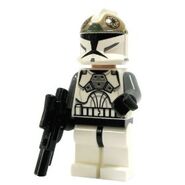