The Clone Troopers Battle Pack was released in 2007. The set was originally retailing for $9.99 and contained 58 pieces. It includes minifigures of two Clone Troopers, a 327th Star Corps' Clone Trooper and a Clone Shocktrooper. It included a Clone Turret and a two-seated Barc Speeder.

Send in the Clones!

The Clone Wars are on! When the Separatists attack, the Republic fights back with its legions of Clone Troopers. Build your army with an assortment of battle-ready troopers, complete with a blaster turret and speeder bike! 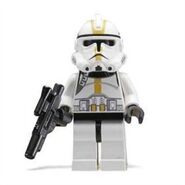