The set contains a model of an AT-AP Walker, on which the Commander Gree minifigure can sit. It features an opening hatch in the side, a rotating blaster cannon, and its legs are poseable so as to imitate walking. It features a spring-loaded shooter and measures 25cm high, 25cm long and 14cm wide.

Enter the battle of Kashyyyk with the tri-leg AT-AP™ walker!

•Weapons include 3 blasters and a Wookiee long-gun

•Jump inside, close the hatch and prepare for battle

•Load the new top-mounted, spring-loaded shooter and fire the missile

•Extend the third leg and take on the roughest terrain 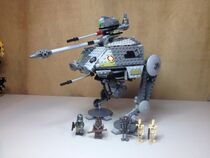 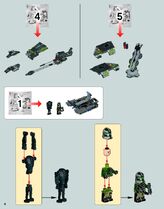