The 75002 AT-RT was released in January, 2013. The set includes four minifigures: Yoda (Clone Wars), a Phase II Clone Trooper, Commando Droid Captain and a Sniper Droideka. This set will consist of 222 pieces and will be originally retailling for US-$ 19,99.

This set consists of a model of a blue AT-RT. The AT-RT is similar in shape to the 7250 Clone Scout Walker, which was released in 2005. The AT-RT has two stickers on it which feature the logo of the 501st Legion.

This set contains four minifigures: Yoda (Clone Wars), a 501st legion Clone Trooper, a Commando Droid and a Sniper Droideka. The Yoda minfifigure is a redesigned figure. It is based on the first version of the Yoda (Clone Wars) minifigure, which has been previously released before with the 8018 Separatist AAT in 2008. It is equipped with a green lightsaber. The Clone Trooper minifigure is an all-new figure and includes a Phase II Clone Trooper helmet and a blaster. It sports a blue marking and has blue arms. It features a one-sided clone trooper face, which is identical to the previously released The Clone Wars clone trooper's faces. The Commando Droid is based on the figure previously released in 2012 with the 9488 Elite Clone Trooper & Commando Droid Battle Pack. This time, it has a white printing on his face. It is eqipped with a blaster. The Sniper Droideka is an all-new minifigure.

Battle the Separatists on the agile AT-RT!

The 501st Clone Trooper is on patrol with Star Wars™: The Clone Wars™ edition Yoda and the powerful AT-RT™ walker when he spots a Commando Droid captain and Sniper Droid. Use the AT-RT’s swiveling laser cannon to attack the Droid! Take your blasters out of the AT-RT’s weapon storage compartment and open fire! Recreate your favorite scenes from the Star Wars: The Clone Wars animated TV series! Includes 3 minifigures with assorted weapons: Clone Wars edition Yoda, 501st Clone Trooper and Commando Droid captain. 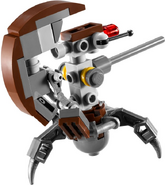 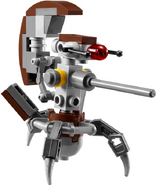