The 7130 Snowspeeder contained 212 pieces and includes minifigures of Luke Skywalker, Dack Ralter and a Hoth Rebel Trooper. It was the second Lego Star Wars set to be released, and it also came with a Hoth Atgar P-Tower. Unlike later snowspeeders, it had a separate cockpit for the gunner. Between the pilot's cockpit and the gunner's station was a cargo bay for a small container to hold the hilt of Luke's Lightsaber. This set was launched in 1999. It had an Old light gray and orange color scheme, unlike newer snowspeeders, which are white. This model also does not have a tow hook, only a harpoon gun with which to fire it. This is the first of four sets featuring a snowspeeder. The other three are 4500 Rebel Snowspeeder, 7666 Hoth Rebel Base, and 8089 Hoth Wampa Cave.

Delay Imperial troops in the snowspeeder!

On the frozen planet Hoth, Imperial walkers search for the Rebel's hidden base. Join Luke Skywalker and Alliance Pilot Dack in the snowspeeder as they try to delay the attack long enough for the Rebels to escape. The Hoth trooper uses his radar to locate the snowspeeder. But Luke knows no fear - the snowspeeder is armed for battle with two forward laser cannons and a rear facing harpoon gun. 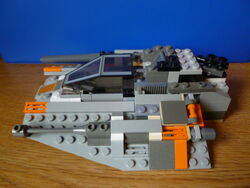 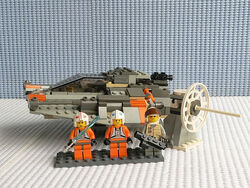 The set
Deutsch
Community content is available under CC-BY-SA unless otherwise noted.
Advertisement