The 7106 Droid Escape Lego® Star Wars set was released in 2001. The set contains 44 pieces and was originally retailing for $6.99. Also included are minifigures of C-3PO and R2-D2, and an escape pod as seen in Episode IV. It was the second set ever to have R2-D2 and C-3PO minifigures in it, and it was the old C-3PO and R2-D2 variants. In 2012, another, more detailed, version of the set was released.

R2-D2 and C-3PO make a daring escape with the plans to the Death Star! They hide inside this specially equipped escape pod; when they land safely, the hatch opens for a quick getaway. 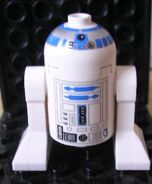 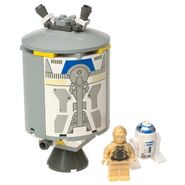